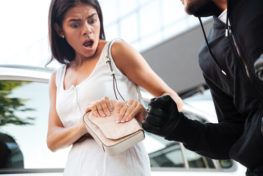 Individuals often use the term robbery to describe a wide range of theft offenses. In actuality, however, robbery is a crime that relates to a very specific crime involving violence in the form of a threat or use of force. In terms of the specific language of the New Jersey robbery law, it is contained at N.J.S.A. 2C:15-1 and provides for either a first degree or second degree crime. Either grade of a robbery offense is serious because it involves virtually guaranteed jail if you are convicted. Your best way to challenge the prosecution in proving a robbery indictment is to insure that you present the very best case possible. Our attorneys have the skill and know how to achieve exactly that. We have been handling carjacking, armed robbery, burglary, heroin possession, cocaine distribution and marijuana distribution offense in Passaic County for over a decade. Give us a call anytime of day for guidance in this matter at 862-203-4070. The following analysis will help you understand the charges you or a loved one is facing.

What Needs to Be Proven To Find Someone Guilty of Robbery?

Pursuant to N.J.S.A. 2C:15-1, to obtain a conviction, the State must prove beyond a reasonable doubt that in the course of committing a theft, the defendant:

For a robbery conviction to be sustained, one of these three acts must be done in the course of committing a theft. N.J.S.A. 2C:15-1 provides that something is “in the course of committing a theft” if it occurs during the commission of a theft, while attempting to commit a theft or in immediate flight after either. This is the reason why a shoplifting can result in a robbery charge when an individual uses force of any kind to escape arrest for a retail theft.

Additional Elements for First Degree Robbery. For a charge to escalate to a first degree, one of the following must also be present during the course of the robbery: (a) the defendant attempts to kill someone; (b) the defendant purposely inflicts or attempts to inflict serious bodily injury; or (c) the defendant is armed with, or uses or threatens the immediate use of a deadly weapon. In applying this requirements, an accused who uses a fake weapon, for example a toy gun, or who says they have a gun but actually do not, will nevertheless satisfy this criteria provided the victim reasonably believes that the perpetrator has a gun.

Penalties If You Are Convicted of Robbery

As stated, any form of robbery offense involves dramatic and potentially life changing consequences. The flip side is, however, that many robbery cases do not involve the severity of someone using a handgun. It may have been street fight where someone grabbed a piece of property in spite or a relatively minor incident involving a cell phone, yet now someone is looking at the possibility of at least five (5) years in jail. Don’t let any situation result in automatic devastation to you and your family’s life. We will fight for you and, even if you appear to be dead guilty, we can frequently make things a whole lot better with hard work on your behalf. If you have been charged with a criminal offense in Passaic County, in towns like Clifton, Wayne, Little Falls, Paterson, Passaic City, Hawthorne, Totowa or Haledon give us a call for a free consultation before things get further out of hand (973)-839-4007.