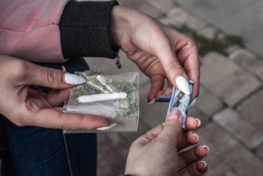 The Passaic County Prosecutors Office aggressively pursues conviction of all intent to distribute charges, including those involving marijuana. Do not be mistaken, there is no free pass because the substance is marijuana – – if its a distribution case, you will be prosecuted like any other form of controlled dangerous substance. Your best short-term strategy for responding to this fact is to retain the best Passaic County Criminal Lawyer you can afford. We would like to believe that our firm, The Law Offices of Jonathan F. Marshall presents a good option for you. We have over a century of combined experience handling serious drug cases, including time working as prosecutors learning how things work from the other side, building relationships, and gaining knowledge as to law enforcement procedures and practices. Our attorneys will carefully analyze the state’s case and explore all possible defenses. Give us a call anytime 24/7 for immediate assistance by one of our experienced marijuana defense lawyers. Our office routinely appears in the Wayne, Clifton, Totowa, Little Falls, Paterson, Passaic City and Hawthrone Municipal Courts.

The grade of offense for a possession with intent to distribute marijuana charge hinges on the weight of the drugs involved. In fact, an individual may be charged and/or indicted for Fourth Degree, Third Degree, Second Degree, or even First Degree distribution of marijuana depending on the amount sold.

The prosecutor may aggregate the quantity of marijuana involved in multiple sales to determine the level/grade of offense to be charged.

Our attorneys have years of experience defending cases involving allegations of selling marijuana. Just because the police or prosecutor says you sold marijuana does not mean that you will be convicted of distributing. There are many defenses that may be utilized to prevent a successful prosecution, including that it was possession of marijuana for personal use rather than intent to distribute, that the weight was in error, that the drugs were seized in violation of your rights, that the stop was invalid, that your miranda rights were violated or that the search was unconstitutional. Call us and an attorney will be happy to review the facts of your case in detail and advise you of the best options for avoiding a conviction for selling marijuana.We can be reached immediately at 800-333-4184 or you may set up a face to face appointment at our Wayne or Clifton office.