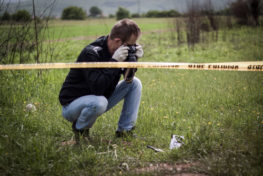 If you or a loved one has been charged with murder under N.J.S.A. 2C:11-3, the stakes in selecting the right attorney to defend the case are extremely high. The reason for this statement stems from the fact that murder is a first degree crime in New Jersey, the highest grade of criminal offense, and can often involve a life sentence. This charge also happens to involve a significant level of grief in many instances and the ultimate act of violence in the eyes of society. There is no question that a murder offense or manslaughter charge is best handled by an attorney with experience defending such complex and high exposure crimes. We encourage you to take a close look at the credentials of the defense team at our firm and to give us a call if you are interested in discussing representation. We can be reached 24/7 at 973-839-4407.

Under N.J.S.A. 2C:11-3, a criminal homicide becomes a murder if the accused possessed an intention to kill or cause serious bodily injury to the victim. The more specific elements necessary in order for the prosecution to prove a murder charge are:

How Do You Prove Purposeful or Knowing Conduct?

There is rarely any direct evidence to establish that a defendant’s conduct was purposeful or knowing, leaving the Prosecutor to rely on other evidence as proof. Often, the defendant’s use of a deadly weapon allows the jury to make the inference that he or she intended or knew that their conduct would result in death. A purposeful or knowing killing can also be inferred from the number of times that the defendant struck the victim (where the victim was beaten to death). While the State is not required to prove motive, such proof can go a long way in establishing whether the conduct was committed purposely or knowingly.

What is Felony Murder in New Jersey?

A person can be found guilty of Felony Murder regardless of whether or not it was their own action that caused the death of the victim. Felony murder applies where that defendant, acting alone or in concert with others, while in the commission of a Burglary, Robbery, Sexual Assault, Criminal Escape, act of Terrorism, Arson, Kidnapping, or Carjacking, causes the death of any person (other than a participant).

What are the Penalties for Murder in New Jersey?

Murder is a crime of the first degree, and is punishable by a term of imprisonment between thirty (30) years and Life. The defendant will be ineligible for parole during the first thirty (30) years of the sentence. The fine associated with a first degree offense is up to $200,000. Depending on other relevant circumstances, known as Aggravating Factors, the term of imprisonment can be increased. If the victim was a law enforcement officer and was killed while performing his official duties, or was murdered because of his status as a law enforcement officer, the defendant will be sentenced to Life Imprisonment without the possibility of parole. If the victim was less than fourteen (14) years old and was murdered during the commission of a sexual assault or aggravated sexual assault, the defendant will be sentenced to a term of Life Imprisonment without the possibility of parole. Other factors can also aggravate sentencing considerations, such as the grotesque nature of the murder (whether it involved torture), or whether the murder was committed in return for something of pecuniary value (a contract killing).

For further information regarding a murder indictment or other consideration associated with this offense, including bail, please do not hesitate to contact our office. An attorney is available immediately at 862-203-4070.