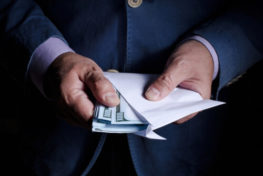 Money laundering is basically the act of taking illegally derived money and utilizing it in a manner so as to create the appearance that it was earned through a legitimate business operation. Examples of enterprises where money laundering charges typically come into play are those involving distribution of drugs, gambling, selling firearms and promoting prostitution. It should be emphasized, however, that there is virtually no end to the list of illegal activities that could give rise to money laundering charges. What is more pivotal, assuming you were arrested on this offense, is that you understand the seriousness of the situation. Money laundering has the potential for result in up to twenty (20) years in prison.

If you or a loved one is in jeopardy of being convicted of money laundering under N.J.S.A. 2C:21-25, you need to insure that the best approach is taken to dismiss and/or minimize the penalties presently hanging over your head. The attorneys at our firm, the Law Offices of Jonathan F. Marshall have the experience and skill to help you. A lawyer is available 24/7 to assist you at 862-203-4070. Give us a call. Our team of extensive experience in all courts located in Passaic County including Totowa, Ringwood, Clifton, Hawthorne, Little Falls and Haledon.

What is Money Laundering?

While many people are familiar with the term, very few actually understand what constitutes money laundering. To convict someone in accordance with N.J.S.A. 2C:21-25, the State must prove, beyond reasonable doubt, that the accused did one of the following:

a. Transported or possessed property known or which a reasonable person would believe to be derived from criminal activity; or

c. Directs, organizes, finances, plans, manages, supervises, or controls the transportation of or transactions in property known or which a reasonable person would believe  to be derived from criminal activity.

Degree of a Money Laundering Offense

As previously stated, the severity of the penalties for money laundering depend on whether the conviction is for a first, second or third degree crime. If convicted of money laundering in the first degree, a defendant will serve up to twenty (20) years of prison with a minimum term of parole ineligibility between one-third (1/3) and one (1/2) of the sentence imposed. The court, at the request of the Passaic County Prosecutor, may also impose a $500,000 Anti-Money Laundering Penalty.

If convicted of money laundering in the second degree, the defendant will serve up to ten (10) years of jail. A $250,000 anti-money laundering penalty may also be imposed.

A criminal penalty may also be imposed for each grade of this offense in an amount equal to three (3) times the value of the property or money involved in the money laundering.